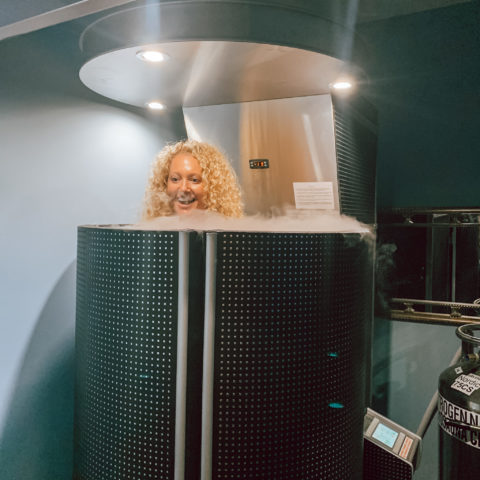 What is Whole Body Cryotherapy at Physio Logic?

Cryotherapy, also known as cold therapy or ice treatment, is a modern non-invasive method of treatment in which the external surface of the body is exposed to extremely cold temperatures for several minutes. The most effective cryotherapy treatment is whole body cryotherapy(WBC), where patients enter our single-person cryogenic chamber manufactured by one of the world’s leaders: Juka CryoSauna Chamber. The temperature drops between negative 200-300 degrees Fahrenheit by using liquid nitrogen, and treatment times last 3 minutes.

How Does Whole Body Cryotherapy Work?

When you enter a chamber, you are not coming into direct contact with liquid nitrogen, but you are close enough to the source that it rapidly drops the temperature of your skin. This rapid decrease in temperature has many physiological effects and ultimately triggers the release of B-endorphins, anti-inflammatory molecules, and increases the total anti-oxidative status of the patient. This has been shown to improve wellbeing, gives a positive relaxation effect, supports endurance and strength training, and is a method of biologic regeneration.

HOW OFTEN CAN I USE CRYOTHERAPY?

It is recommended to undergo a cryotherapy session not more than once a day.

HOW SHOULD I PREPARE FOR THE TREATMENT?

Juka devices are designed to ensure the highest possible safety standards. While maintaining the recommended precautions and following the guidelines of the manual for use, the cryotherapy session in the Juka cryosauna and cryochamber is completely safe.

WHAT ARE THE CONTRAINDICATIONS?

How much does Whole Body Cryotherapy cost at Physio Logic?

Physio Logic is next level. They have helped me so much in recovering from a year-long injury using PRP, Pilates, and now HBOT. As an athlete, there’s no better place to get treatment or increase performance than Physio Logic. Every doctor and therapist is knowledgeable and has the drive and urgency to offer the best protocol possible. I can’t thank the PL team enough.
– Professional soccer player, EF Huesca in Spain

HBOT gives me a chance to not only relax but also enhance my recovery at the same time. My endurance and recovery were accelerated and felt like I was more resilient to future stressors. I routinely meditate and HBOT allows me to hit two birds with one stone. It’s safe and painless, you can even do computer work or answer phone calls during it!

What is HBOT Therapy?

6 Contrast Therapy Benefits: How Does Cold to Hot Therapy Elevate Recovery and Performance?

Athletes and the human population are continuously pushing new heights and boundaries that can, at least partially, be…

Currently, the available data from the last two decades indicate the global average life expectancy has increased by…