6 Apple Cider Vinegar Health Benefits That Will Leave Your… 🤯

The Ins and Outs of Apple Cider Vinegar

How Apple Cider Vinegar is Made

Before we explore the various health benefits of apple cider vinegar, let’s briefly explain how the product is made. The most important ingredient is, of course, apples. These apples are first cut up into pieces and then are squeezed to produce juice. The fermentation process is then started with the addition of yeast. After that, it is fermented a second time, transforming the juice to alcohol and then to a slightly bitter vinegar.

You Can Add It To Your Diet

This vinegar can then be added to people’s diet in many different forms, but most people consume it in liquid form. However, you want to be careful about consuming apple cider vinegar this way. For example, drinking straight apple cider vinegar is unpleasant, and it could also hurt your teeth. A better option may be diluting it in another liquid.

If the liquid form isn’t exactly your cup of tea, it might be worth looking into the tablets or gummies instead. The only downside to the gummies is that you don’t really know the true amount of apple cider vinegar per serving like you would when it’s in liquid form. 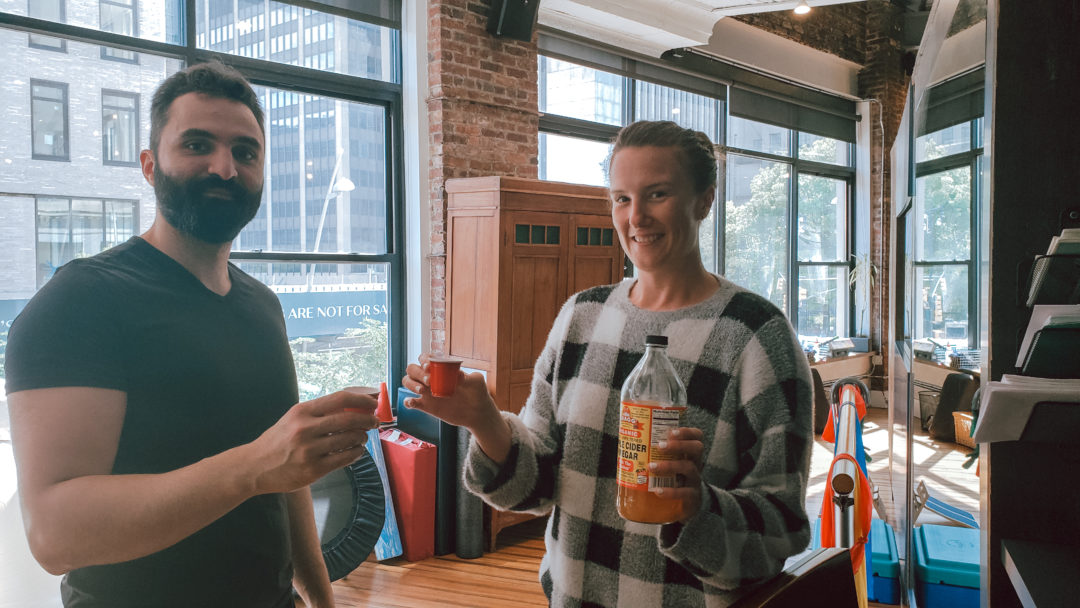 Apple cider vinegar may help fight obesity, and this is primarily due to its acetic acid. Acetic acid makes up roughly 5 to 6 percent of apple cider vinegar. Not only does acetic acid help curb a person’s appetite, but it also may help in stoking their metabolism. Basic science tells us that if someone is eating less and simultaneously burning more calories, they will likely lose weight.

Health Benefit #2: Apple Cider Vinegar May Be High in Antioxidants

Research demonstrates that apple cider vinegar, particularly raw apple cider vinegar, contains many antioxidants. Antioxidants, no matter what food or supplement they are found in, benefit the human body in myriad ways. For example, these antioxidants help reduce oxidative stress, which can make people more susceptible to health issues, such as cancer and cardiovascular disease. A less well-known benefit of antioxidants is that they may help fight eye disease, including dramatically cutting the risk of macular degeneration. But, additional research still needs to be carried out to quantify these benefits.

Health Benefit #3: Apple Cider Vinegar May Be High in Probiotics

Many people are looking for new ways to add probiotics into their diet since probiotics have been shown to help maintain healthy gut flora balance. Traditionally, Greek yogurt has been a go-to product that is rich in probiotics. But, not everyone can eat yogurt. For example, some people may be lactose intolerant. Therefore, apple cider vinegar, which is naturally rich in probiotics, can be a great alternative product for these people.

As the American population continues to age and our lifestyles are becoming increasingly sedentary, more and more Americans struggle with Type 2 diabetes. The Centers for Disease Control and Prevention (CDC) estimate that more than 30 million Americans have Type 2 diabetes.

At present, the go-to treatment for Type 2 diabetes is injecting insulin when blood sugar levels careen out-of-control. But, many people are needle phobic, and they are looking to embrace alternative (needle-free) treatment options. One of these alternatives could be apple cider vinegar. Taken after meals, this potent vinegar may cut blood sugar levels.

But Is It Enough?

The downside of this approach is that apple cider vinegar may not be potent enough to address all blood glucose concerns. Also, more research needs to be carried out on this topic. There are still lingering questions about the interaction between apple cider vinegar and how the body reacts to glucose. But, there are promising indicators. Even if apple cider vinegar alone is not enough to control someone’s diabetes on its own, it can be a powerful add-on or complementary treatment to more traditional options and can help stabilize wild blood sugar fluctuations.

Acid reflux happens when stomach acid moves back up into a person’s esophagus. This acid can dramatically irritate the lining of the esophagus, causing pain and discomfort, as well as potential nausea and vomiting. This is often treated by either prescription or over-the-counter antacid medications. But, some patients do not want to pursue this treatment route.

For these people, apple cider vinegar may be a good alternative. There is promising anecdotal evidence that seems to suggest that this supplement could benefit some who struggle with acid reflux. But, like with many areas of medicine, more research needs to be carried out. Yet, even though more research still needs to be done, the risk of adding this to your daily diet seems incredibly small.

Over the years, studies have also looked at if apple cider vinegar could be a way to treat Alzheimer’s disease, which is associated with dementia and memory loss. Oxidative stress is typically what causes dementia and eventually the death of neuronal cells. While medications are available to lessen the symptoms of Alzheimer’s disease, there is currently no cure. However, promising studies show that fruits and vegetables containing phenolic combinations could reduce the risk of Alzheimer’s. Do you want to know what else includes phenolic combinations? You guessed it! Apple cider vinegar!

A study was actually done where aged mice who suffered from impaired memory functions were given a diluted form of apple cider vinegar in water. After receiving it, they noticed that cognitive function improved in these mice. More research is definitely needed in this area, but it would be groundbreaking if apple cider vinegar could be used to combat Alzheimer’s disease and other cognitive impairments.

For years, apple cider vinegar has been a treatment staple in many communities around the world. But, Westerners have been significantly slower at accepting this product. A host of different factors likely fuels this reluctance. But, in recent years, there has been an uptick in Americans trying out this product that has been doubly fermented from apples and is widely available in different sizes.

As this article notes, there are many reasons for this shift. One of the more important reasons is the uptick in scientific studies that have found real changes after people start using apple cider vinegar. Two essential benefits are that apple cider vinegar is high in both antioxidants and probiotics. These two substances can help keep numerous body systems, including the heart, lungs, and brain, and keep you happy and healthy.

Talk With Your Doctor Before Adding It To Your Diet

Given the fact that scientific research into apple cider vinegar is relatively limited, consumers need to be flexible about deciding if they should start using this treatment. The answer is most likely yes – the negatives pale next to the positives. Some people may develop symptoms, though. This is why consumers should watch to see if any unusual symptoms develop after adopting apple cider vinegar, and they should reach out to their doctors in this case. It is also important that consumers clearly articulate to their medical provider that they are taking these supplements. In rare cases, apple cider vinegar can work against something that was already being utilized.

So, you want to stop popping so many pills. Nice! Now, that that’s settled… Where to go…