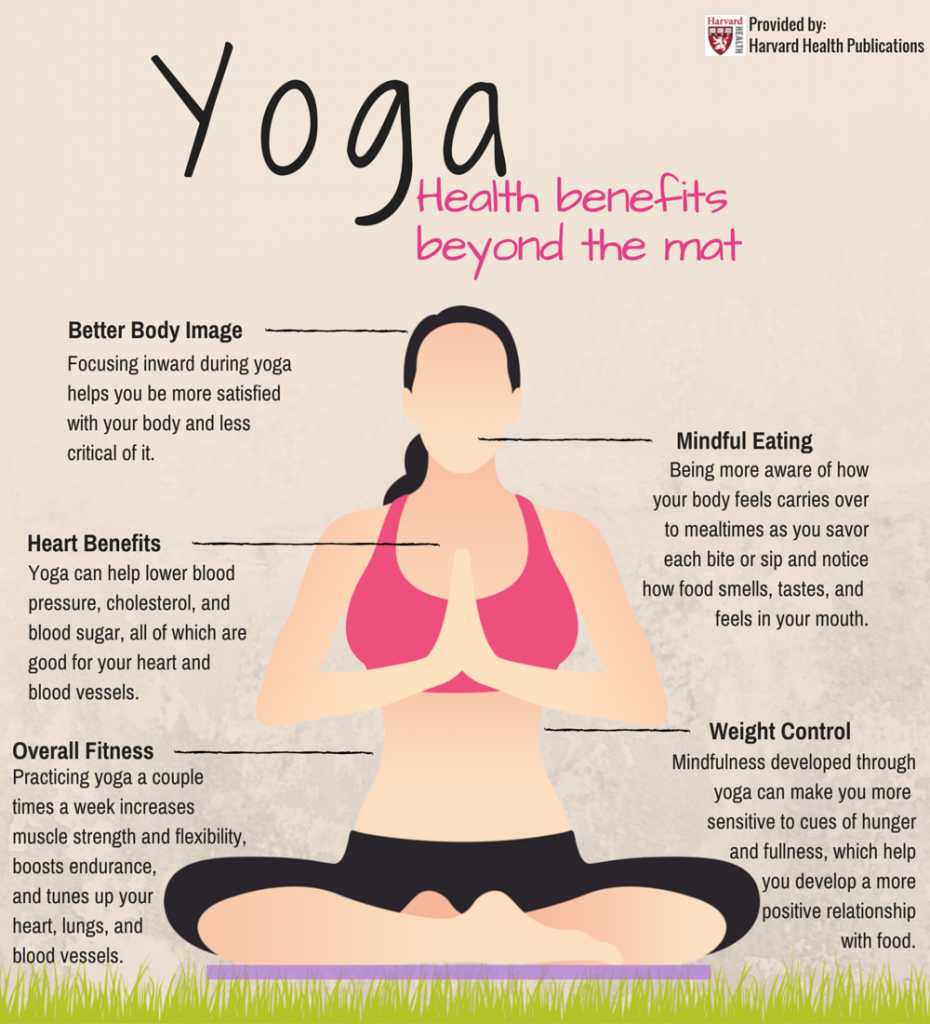 Once considered an alternative “hippie thing,” yoga studios are sprouting up on every corner and classes are being taught everywhere from the Rockaway boardwalk—to the Wall Street boardroom.

As yoga becomes an integral part of 21st-century life, the research, aligned with new methods of inquiry and technology has begun to catch up with the 2,500 year old art/practice of yoga.

Dozens of studies have been published allowing us to have a deeper understanding of anatomy and physiology of not just the asana (postures) but also pranayama (breath) and meditation.

Fascinating evidence has emerged on how the practice affects our body, mind and spirit. Although the prevalence of yoga is at an all-time high, 9.5% of U.S. adults (21 million used: National Health Interview Survey), much of the research is still in the early stages.

The next decade will teach us even more about what yoga’s role is not only in the promotion of health, but also in the prevention and treatment of the conditions we face today.

As defined by the National Center for Complementary and Integrative Health, Yoga in its full form combines physical postures, breathing exercises, meditation, and a distinct philosophy. There are numerous styles of yoga. Through the practice of yoga, we learn to breathe more fully and move more mindfully. Yoga helps us find better balance, strength and flexibility on the mat–and off.

Yoga literally means, “to yolk,” or “union.” Hatha yoga (“ha,” means “sun,” and “tha,” means “moon”) is the most commonly practiced in the U.S. The intention of yoga is to find union, or yoga, between the opposing forces, like the mind and body, the body and breath.

As a teacher of yoga for over ten years and dedicated student for over 16, I have witnessed the transformational power of yoga on my students—and myself. I was searching to find something I truly enjoyed doing, and once I stepped onto a yoga mat—well, I have been on my mat ever since.

As co-founder of FRESH Med, an acronym that stands for: Food, Relaxation, Exercise, Sleep and Happiness—or the “five pillars of well-being,” I will describe how yoga is incorporated into the FRESH model of care. These are questions from “real” New Yorkers. 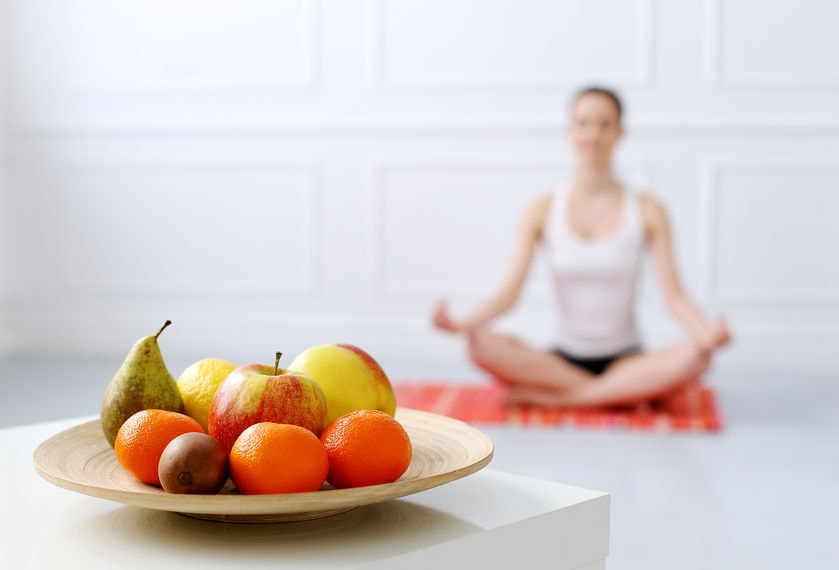 Can yoga help me with food cravings and weight loss?

Yes! Oftentimes, our emotions drive our decisions and because yoga allows us to feel more balanced both physically and mentally, it helps us with self-regulation, or control of one’s emotions and appetite. Research has shown that yoga aides in digestion, increases insulin sensitivity, lowers cholesterol and helps you lose weight. Yoga makes us appreciate our bodies and really helps us with body awareness. When we are more aware, we make better decisions.

Is there a particular yoga diet?

There is no one “Yoga Diet” and the dietary patterns yogis choose isn’t just about losing weight or being skinny. Instead, it’s about listening to your body and fueling it with the foods that nourish you. In general, I recommend eating real food, fresh, organic produce and “mostly plants,” when possible. Eat mindfully, slow down, chew, and try to adopt the Confucian mantra, “Hara Hachi Bu,” which translates to “belly 80% full.” 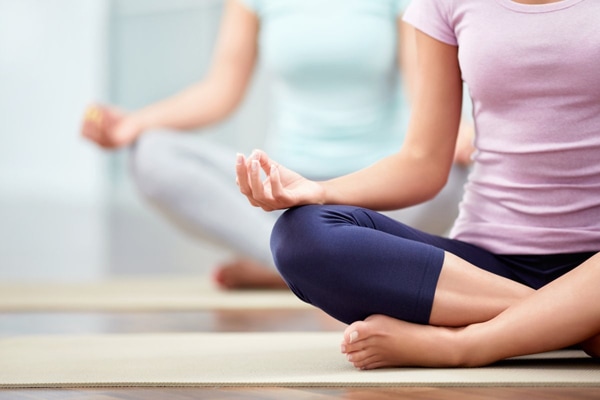 My commute stresses me out! Can yoga help chill me out off the mat?

In our high paced, revved-up, “always-on” city, our bodies spend too much time in an over-stimulated sympathetic (flight or flight) state, contributing to an epidemic of stress. The deep breathing practiced in yoga activates the parasympathetic nervous system, producing a natural occurring “relaxation response.” Modern technologies, like functional MRI machines, give scientists (Drs. Richard Davidson and Sarah Lazar) a glimpse into how meditation affects the brain. We are now able to get a glance into the meditating mind and have a much deeper understanding of what happens in the brain during meditation.

Long-term practitioners can actually change their brain, the chemistry and structure that correlate with their being less reactive and less emotionally explosive. Cells that “wire together, fire together” and research has shown that meditation increases the activity of the left prefrontal cortex—the area of the brain that’s associated with positive moods, peace, and resiliency. Simply, yoga and meditation help activate our own happiness center. 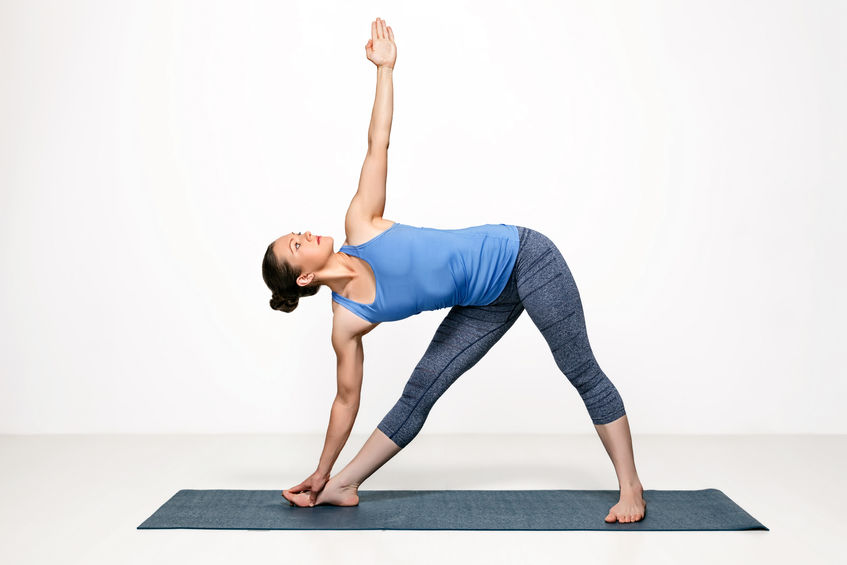 Can yoga help me to burn calories and make me stronger?

Most people underestimate the physical benefits of yoga. If you’re interested in burning more calories, try some advanced yoga classes, like Vinyasa, which move at a faster pace. These classes can be challenging, even for the seasoned yogi, and require students to move more quickly and hold more complex poses for longer periods. As much as yoga poses can strengthen your body and improve flexibility, yoga has also been called a “work-in,” as it also does wonders to your brain and helps bridge the gap of feeling both energized and relaxed. 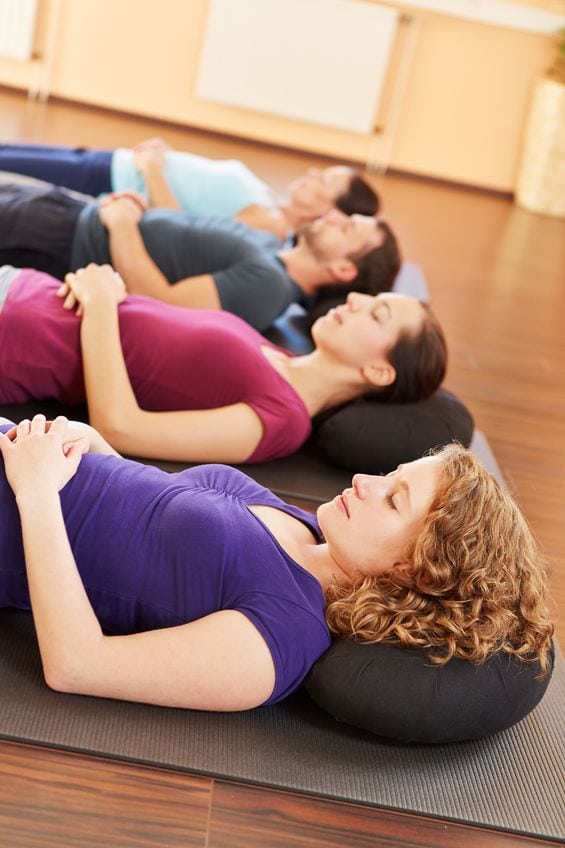 How can yoga help me sleep better?

Living in “the city that never sleeps” is not always a good thing. According to a recent Huffington Post survey, sleep deprivation is a major source of stress among U.S. adults. In bed, we are often alone with our thoughts, and that’s when the “monkey mind” revs its ugly head. We often have trouble falling sleep because we’re worried and anxious, and in turn, since we didn’t get enough sleep—that makes us stressed the next day. That’s where yoga can help. By lowering stress levels, calming the mind and relieving tension in the body, the soothing practice of yoga can be an effective natural sleep remedy.

Certain resting and inversion poses (asanas) can be particularly helpful for restlessness, breathing exercises can slow down your heart rate to help prepare you for sleep, and regular meditation can keep you from getting tangled up in the worries that keep you from drifting off. More restorative poses can be helpful in the evening before hitting the hay. 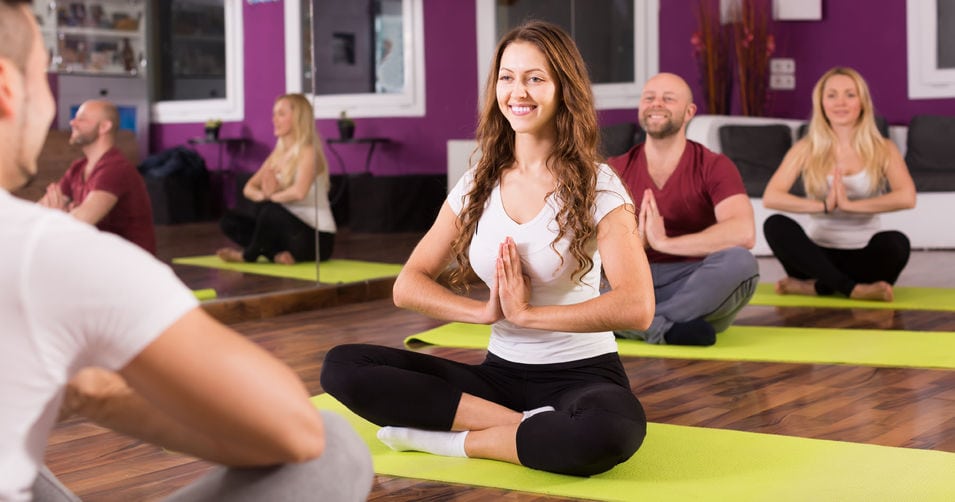 I’m from Queens and people annoy me! But, yogis always look (so damn) happy. Why?

Yoga may not only be the path to enlightenment—but also to happiness. Currently, there is no scientific study determining whether yoga makes us happy, but research has proven certain postures, breathing techniques, and thinking positively influence our physiology and brain chemistry. In fact, yoga (Iyengar) has been linked with increased levels of a brain chemical called gamma-aminobutyric acid (GABA), which is associated with positive mood and a sense of wellbeing. Scientists now realize the level of this amino acid also determines how relaxed you are.

Additionally, yoga triggers the release of oxytocin, the “cuddle or happy hormone.” Lastly, yoga reminds us that we must stay present, and have an attitude of gratitude. Remember, New Yorkers, “it ain’t where you’re from, it’s where you’re at.” -Rakim